Does a Roth Conversion Really Save Taxes?

A couple just retired and wants to determine if converting 401(k) assets to a Roth will raise their living standard.

John and Mary's non-retirement savings: $800,000
John and Mary both intend to apply for Social Security benefits at age 70.

John and Mary want to know the impact on their finances—current and future—were John to convert part or all of his $540,000 401(k) retirement account to a Roth retirement account. A conversion means taking money out of the 401(k), paying taxes on the income from the withdrawals, and then contributing the withdrawn amounts to John's Roth.

John and Mary create a Base Plan, which assumes that John leaves all of his retirement savings in his 401(k) plan and does no Roth conversion. According to this Base Plan, John and Mary can spend $113,368 in current-year dollars, in each future year. This is their annual discretionary spending. It's above and beyond their fixed (required spending) on housing costs, taxes, and Medicare Part B premiums.

Next John and Mary create an alternative scenario so they can easily compare it to the base profile described above. They set up an alternative profile and then modify John's retirement account using the Roth conversion link in his account to indicate that he wants to convert $100,000 for the next four years. He then saves this modification using the SAVE button. Finally, they run this comparison report that is specifying that John converts $100,000 each year for four years to a Roth, $400,000 total.

The conversion raises the couple's annual discretionary spending from $113,368 discovered in the base profile to $116,919. That's $3,551 more each year for the next 36 years through age 100. The present value of the additional future discretionary spending this conversion provides amounts to $110,926. This increase in living standard costs them a few hours of paperwork and entails no extra risk.

How Does this Plan Work?

One of the benefits of a Roth conversion involves taxes. Because they aren't working and haven't yet received their Social Security benefits or started their 401(k) withdrawals, John and Mary have relatively little taxable income in the present compared to the future. The Roth conversion lets them take advantage of their temporarily low tax bracket by paying more taxes in the present and less in the future since withdrawals from Roth accounts are not subject to taxation. Of course, John and Mary need to have enough money to pay the extra taxes. That's where their $800,000 in non-retirement assets comes in handy.

The table below compares combined federal and state taxes in 2020 and for several years after the 2020 conversion. 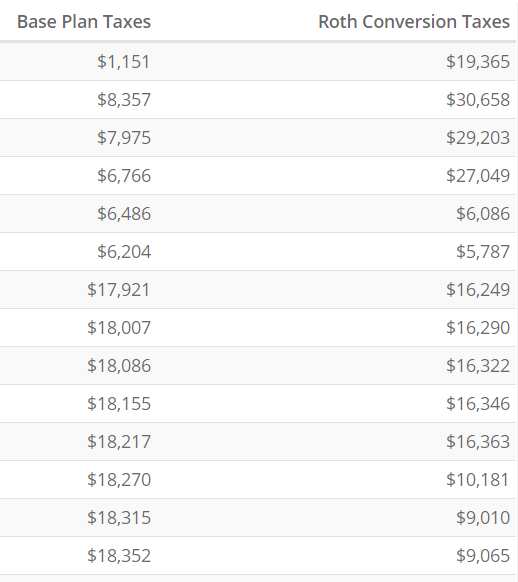 The chart below compares lifetime taxes in the Base Plan and under the $400,000 conversion. Notice the long-term reduction in taxes in the Roth conversion scenario vs. the base plan.

Converting qualified 401(k) assets to a Roth can be a risk-free and cost-free way to raise your annual discretionary spending.

No two Roth conversions are alike because no two lifetime personal economies are alike. Sometimes the savings are dramatic as seen above and sometimes very modest—and sometimes converting to a Roth creates a lower annual discretionary spending. Each household economy is unique. Fortunately, MaxiFi lets you experiment with different conversion options, and its calculations are customized to your household's circumstances and will show you precisely, to the dollar, what a Roth conversion will mean for your household's bottom line which is its annual discretionary spending from the current year to the end of the model.