Should You Now Wait Till 75 To Take Your IRA?

Congress has just passed The Secure 2.0 Act. The new law has a number of provisions, including several that expand voluntary and increase mandatory contributions. But the big banana, which Wall Street loves, is the ability of retirees to defer taxable withdraws from their IRA accounts from the current age 72 to 73 in 2023, if you reach 72 in that year or later, and to 75 starting in 2033.

The acronym RMD refers to Required Minimum Distribution. If you are retired and reach your RMD start age, you need to take withdraws on a fixed schedule. Say you are 72 on December 31st of this year and had $1 million on December 31, 2021 in your IRA. Then your distribution period (assuming you qualify for the standard table) is 27.4 years. Dividing $1 million by 27.4 equals $37,037. This is the smallest amount you need to withdraw from your IRA in 2022. Next year, you’ll be 73. The current age-73 factor is 26.5. So if the table doesn’t change, you’ll need to withdraw whatever’s in your IRA at the end of this month divided by 26.5. Etc.

Being able to wait till 75 to start withdrawals means, of course, deferring payment of taxes on your IRA balance and its accruals. That’s the tax deferral advantage of IRAs. The downside is that by waiting to withdraw, you reduce your cash flow. You also clump your withdrawals into fewer years meaning you can wind up in a higher tax bracket when you start cashing out.

We know that deferring withdrawals is nice for Wall Street, which can keep its fee-charging paws on your money. But does it make sense for you? The answer depends, of course, on your particular financial situation. But here’s an example of a hypothetical couple for whom waiting even beyond age 64 to start withdrawals would be a major mistake. (Full disclosure. I ran this couple through my company’s MaxiFiPlanner software.)

Meet NY couple, Jolene and Jeremy Jones. Their hypothetical friends call them the Jays. Both Jays are 62, both earn $250,000, both will retire at 64, both will take their Social Security retirement benefit at 64, and both intend to start IRA withdrawals at 75. The couple met in accounting class, fell immediately in love with each other’s Montblanc pens, and decided to live happily ever after. Their nuptials included mutual vows to minimize their taxes. The couple has no children, but three mastiffs, who eat a lot.

The Jays are clearly a power couple. Each has $3 million in their 401(k). They also have $250K in regular (non-retirement-account) assets. Plus they own, free and clear, a $2.5 million home in tony Chappaqua. The two figure on earning 1.5 percent above inflation on their investments. (That’s roughly the current real return on 30-year TIPS (Treasury Inflation Protected Securities.) And, given they’ll jointly be hawing in close to $80K in inflation-indexed Social Security benefits, they’re thrilled that they can now wait until age 75 to start their IRA withdrawals. (Note, they’ll convert their 401(k)s to IRAs at retirement.)

But the Jays need to switch pens. Better yet they need to run MaxiFi. Check out the dotted line in the chart below. It shows the Jays’ living standard per person under their game plan. Clearly, waiting till 75 to begin IRA withdrawals leaves the couple terribly cash-constrained. And, to tell the truth, both Jays are getting rather long in the tooth. They want to Bridge-party on down before dropping dead.

The Jays know plenty about taxes. They know nothing about benefits, particularly the huge return from waiting till age 70 to start Social Security. Clearly, if they wait till age 70 to take Social Security and till age 75 to start IRA withdrawals, they’ll have bubkes to live on between 64 and 70. An alternative is to switch things around — take Social Security at 70, but start smoothly withdrawing from their IRAs at 64. The result is the solid green curve in the chart. Note that their cash-flow problem has disappeared. They can spend $166,265, in today’s dollars each year through age 100 were they to live to this assumed maximum age of life.

But does this plan raise their lifetime spending valued in the present (measured in present value)? It does — by a whopping $357,552! as the second chart shows. That’s roughly what the Jays are jointly earning this year after taxes. Thus, simply by changing two financial decisions, they can earn what would take them a year’s full-time work to earn. That’s Money Magic! 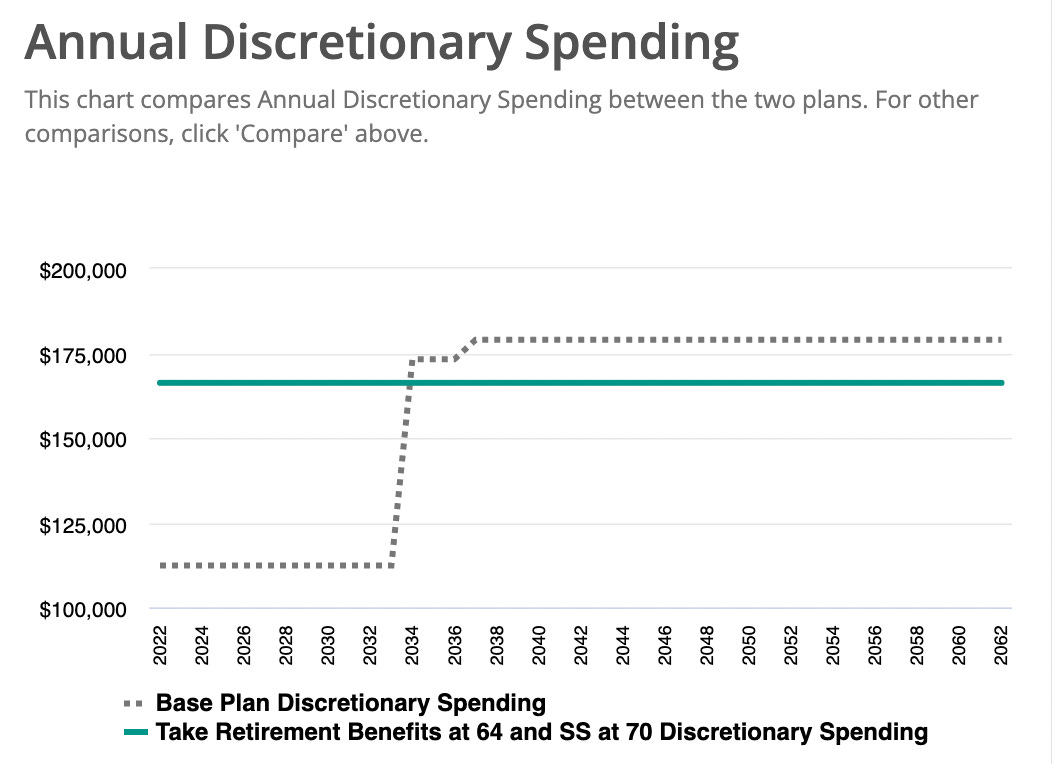 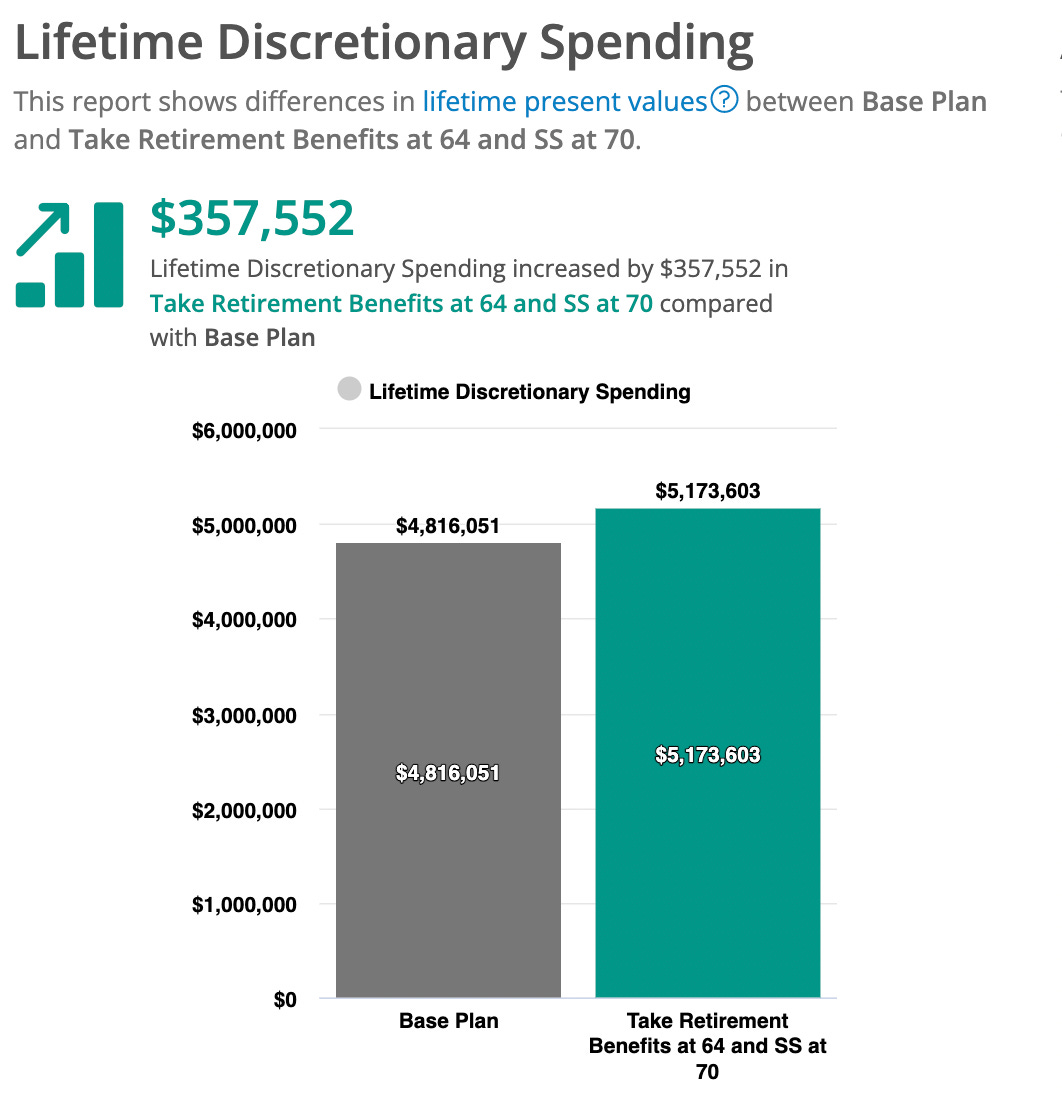 Please check out the last chart. It shows the present-value (PV) changes in the Jays’ lifetime balance sheets arising from this switcheroo. In PV, Social Security benefits rise by $352,374. On the other hand, the PV of federal taxes increases by $72,636. Interestingly, the couple pays $27,189 in PV in NY state income taxes. They also pay PV $50,625 less in Medicare Part B premiums (a tax in all respects except its name.)

So the Jays have it wrong. Waiting till 75 is less tax efficient. The decline in state taxes and Medicare premiums exceeds the increase in federal income taxes.

Can the Jays do even better by, say, taking Social Security at 70, but starting their IRA withdrawals at 66 rather than 64. The answer is yes and no. Doing so raises their lifetime spending by about $20K, but it reintroduces cash flow problems.

Here’s my bottom line. If something makes Wall Street really happy, it’s not likely to make you really happy. If a couple as well-heeled as the Jays aren’t able to benefit from The Secure 2.0 Act’s increase in the RMD start age, waiting till 75 to start IRA withdrawals is not likely to be in your interest. 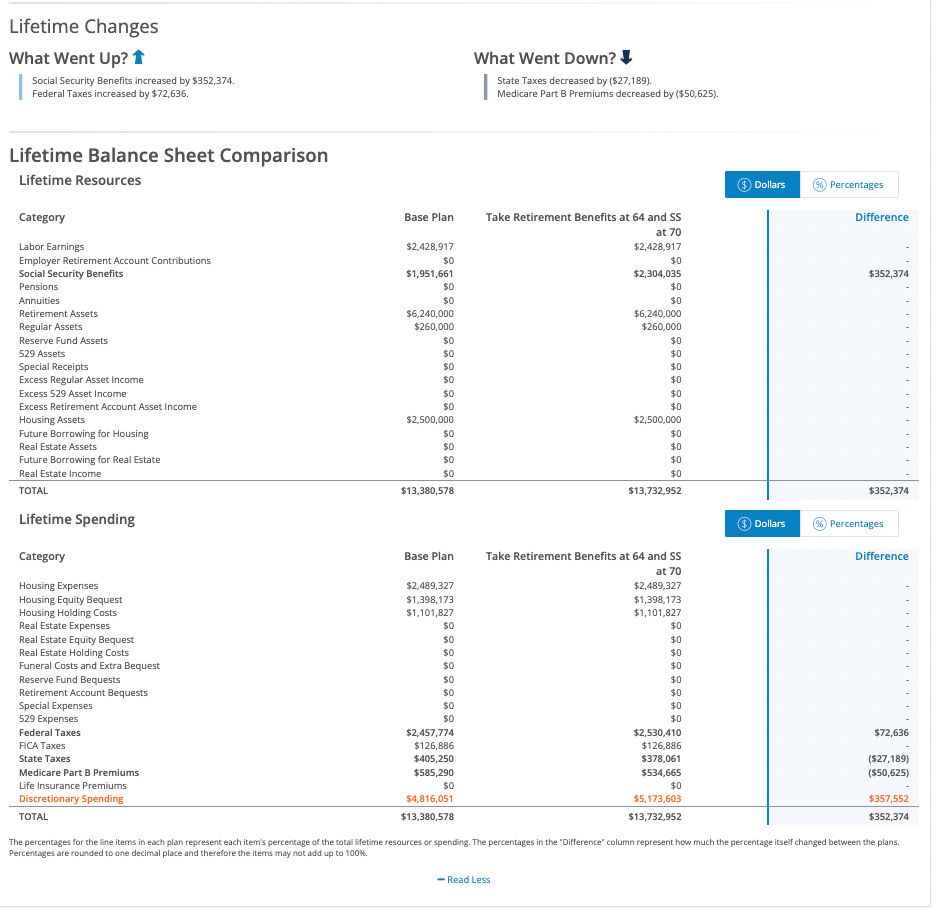