Which Spouse Should Work?

A young couple explores the option of a stay-at-home dad.

John and Mary have a young child named Sheila. John works, earning $40,000 per year. Mary left an $80,000 salary to be a stay-at-home mom. The couple wants to understand how much their living standard would rise were John and Mary to trade places. Specially, they are thinking of having Mary return to work immediately and having John quit his join to watch Sheila. They know this move will improve their living standard. What they don't know is by how much?

John and Mary create a Base Plan where Mary stays home, John works at $40,000 for the next five years, and Mary returns to work in five years at $80,000. According to their Base Plan, they'll enjoy $31,403 in annual discretionary spending over the next five years. Discretionary spending is all expenditures apart from fixed outlays on taxes, housing, Medicare Part B premiums, special expenditures, retirement contributions and other off-the-top expenses. 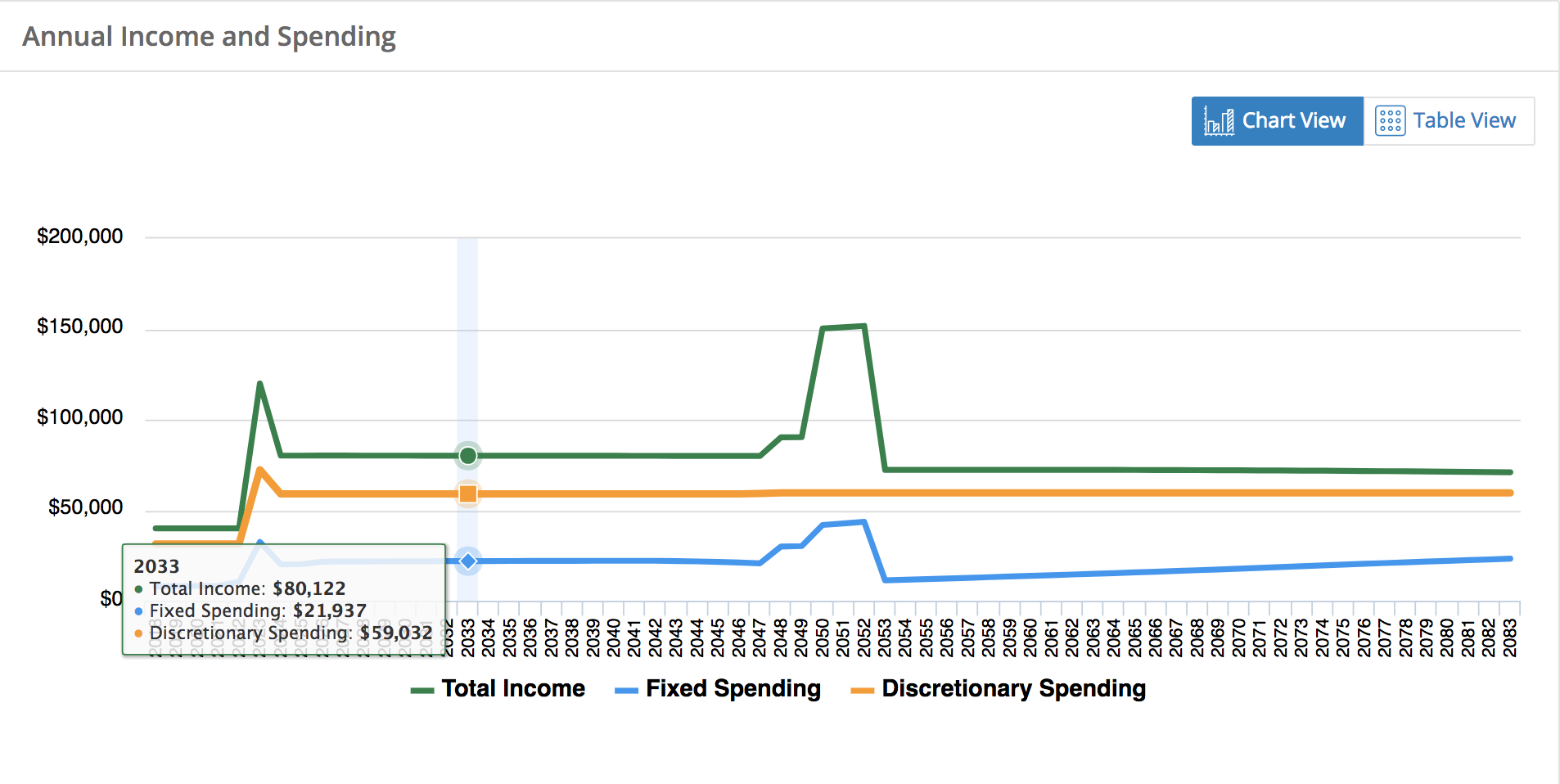 A stay at home dad for five years

If they run the program again but this time indicate that John stays home and Mary goes back to work, they will, for the next five years, have $60,259 for discretionary spending. This is much higher than the $31,464 for the same initial five-year time period in their Base Plan.

When John joins Mary in the workforce after five years, and after the child leaves home, they settle into a smooth $75,533 in discretionary spending as seen in the orange line in the chart below. That's $16,501 more to spend each year, adjusted for inflation, for the rest of their lives—28 percent more to spend each year than they would have for that same time period in the first scenario. Again, when the child is in the home, the orange line in the chart reveals that more money is provided for the household to keep the two adults at the same standard of living they will have when the child leaves home.

How Does this Plan Work?

Mary's salary is higher than John's. Therefore she is able to contribute more to retirement and will earn more Social Security credits, a benefit which pays off when she reaches 66, her age of full retirement. For example, with John working and Mary doing childcare for the next five years, their combined Social Security income is $59,967. This benefit amount goes up to $65,464 if John does the childcare and Mary goes back to work. Likewise, their combined retirement savings will go up from $236,947 to $303,578 by age 66 under the "Mary works now" arrangement.

The near-term benefits are obviously significant, and this initial five-year period alone may seal the deal for them. But looking at the long term, from five years out through the end of life, they must ask themselves if a 28 percent lifetime raise in living standard is worth making the switch? The $16,501 annual raise is inflation adjusted, and this will remain through age 100. For some couples, this inflation-adjusted $1,375 per month for the rest of their lives would mean a lot; for others it may seem not so significant if working is too much of a burden. In the end, the decision is about who wants to be the stay at home parent, who would enjoy the childcare the most, and other family-related values. But given the power of MaxiFi software, they now know the lifetime economic consequences for their household.

Every household economy is unique, and MaxiFi will help you to explore many options. But most importantly, you are not comparing "theories" or "rules of thumb," you are using accurate numbers to compare the real, annual impact on your living standard.